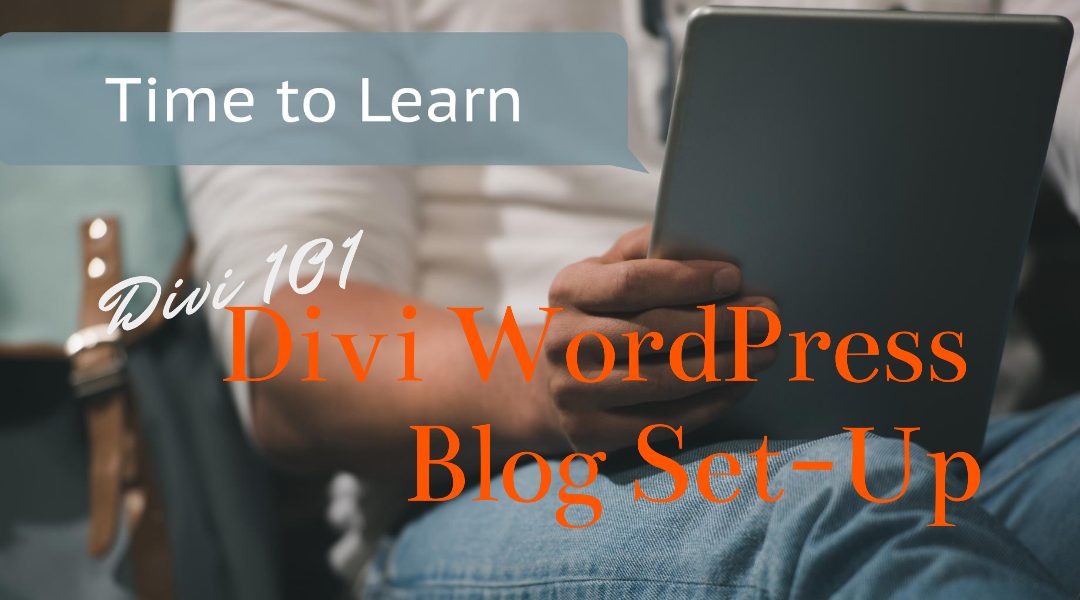 Divi gives you all of the blocks that the default editor in WordPress gives plus more without additional plugins.  As well, once you have created your template, you can clone it with easy and all of your settings are in place.

Okay. Next steps: now there are a lot of different moving parts to a WordPress site, but we’re going to start with the core of where WordPress started, which is the blog.

Setting Up a Blog with Divi

So there were a couple of ways when you’re using the Divi theme that you create a blog post. We’re going to start by using the divi builder and then we’ll do another one that is just a simple WordPress site in a separate post.

And then we are going to create the blogs. You’re going to start with a title. And this is the title I already have set up.

I’ve created a video blog in this case and a transcription of that video. And so that’s what we’re going to be putting in.

And it’s very user-friendly. So in this section now you’re going to see readability is very poor. We use a plugin called Yoast to track some of that information.

As the blog is now empty. We don’t have enough words in order to make the plugin happy. Permalinks are where your actual link to your website to your blog post will be.

Choosing the Category for Your Blog

Cause that’s the title. Once it’s published categories are another section. So we’ve got a couple of categories here. We’re going to choose Devi basics and it will show up under that category on the page or in search tags has to do with the content of your blog.

Now, the video that I created was just a little video on making sure you know, where to sign in, and how to always find the login for your WordPress site. And so I’m just going to put WordPress for right now. And as you hit enter, it will automatically create that tag. I never recommend doing more than one category, but you can put multiple tags. It helps people’s search. The other item is the feature image.

And that is the image that not only appears at the top of your blog, but often gets picked up when someone shares your blog.

So it’s a really important feature. And so you can set that here. If you click on this I’m gonna, I created a new one, so I’m just going to show you, I go into select files.

In my case, I’ve set something here. So it’s easy to find, but you just find the file you want in your computer hit open. I would put an all taxed. And in this case, I’m just using the same thing that the image is named, but you can call it whatever you like.

That makes sense to you and what you’re going to do. But I would definitely feel that in, at each occasion that you add a new image, so set feature image, then it’s going to appear here.

And that’s the image that will share. I’m going to save that draft. WordPress end, do some automatic saves. If you get pushed out, for some reason, it will you won’t lose everything.

You might lose the last minute or two that you have been working but get in the habit of saving frequently.

That’s going to save you a lot of heartache in the long run. Okay? So now we’re going to actually hit use Divi builder, and it’s going to come up with a couple of choices.

I don’t have one in place yet. We’re going to build this from scratch. Okay. And so once you get here, you’re going to see you’ve got your sidebar.

You’ve got your feature image in place, but you don’t have any information yet. And so I’m going to pick a simple square is going to come up with a bunch of different elements.

So I’m going to pick texts. There it is. And here you go. So it’s got some basic text in there.

I’m just going to save this for a minute because the other thing that I’m going to do is I’m going to divide up the information that we’ve got.

So I’m going to put it right there. There is the video, and I’m going to insert that into the post. And down here, you can see it’s already showed up down here. You can also generate an overlay image. So it’ll generate an image based usually on the thumbnail.

That’s in YouTube. If you’re using a YouTube video and you’ll see that over top of the video is a little play button and you have some control over that.

You can actually go into here and the play icon. You can choose another, pick another color. So then it shows up a little bit better. And those can be any color that you wish. So I’m just going to hit save changes. And then at the bottom, I’m going to add a new section.

Adding in Copy to Your Blog

This comes up. I always recommend actually editing in this box and not directly on there. You can, but if you hit the wrong key or you end up with a strange outage or you get kicked out for any reason, it can get a little wonky.

And so I generally just come straight into here and edit whatever you want to edit. So I’m just gonna put a great heading on the top here, and then you’re gonna make this probably heading to you want to use some of these different headings in order to send signals to the search engines about the kind of content that is on this page, the search engine, can’t read the image.

If you accept the alt image description that you’ve put in and they can’t read the video, so you need to give them some extra pointers on what the topics might be. So I’m just going to leave that there. So you can see that shows up a little more prominently. And then when you look at this, it’s just a solid block of text.

And since, especially since most of us are looking at mobile now, instead of our phone, it can be a little dense to look at.

So this is another place where you’re going to want to insert some headings. There might be a list and you can make it bullet point, or it can just be a phrase that you might want to emphasize, right?

Key phrase. And then again, we clicked out if you find you’ve clicked out, cause I just did what I told you not to and, and edited inside.

So there you go. It’s three that can clean that up. Obviously, the different things that are part of any conversation.

You’re going to want to get rid of it in your transcription, but I’ll clean that up afterwards for these purposes, just to give you an idea of the type of divisions that can make it a little easier on your it’s one we’re actually going to make we’re heading, just because the things that are gonna make it a little easier on your reader’s eye and make it easier for them digest in on a small device.

And so I’m just going to highlight this you can look at the top and see you have an option for a quote.

And so that’s going to give another view of, of an element on your, on your blog. So all of these different things just make it a lot more pleasant for your reader when they are going through the information that you’re providing.

So, and that’s it, it’s going to hit save, and they’re going to come up here. And actually, right here, you’re going to save the draft.

If you are comfortable with what you’ve done, you can hit publish. I’m going to go ahead and publish, even though this needs some cleanup so that you can see what it looks like.

So, and then I’m going to change this to exit because we’re in the visual builder and now we have a video block, right?

So you can play the blog. There we go. And everything that was in that, that little video blog is also written here as well.

And so that is the basics of what you need to do. If you’re going to go ahead and enter new blogs onto your site I highly recommend it.

Founder & CEO of ThinkFlame, Shelly Patrick, trains individuals and companies to understand how their marketing affects their sales conversation and how to integrate marketing into their yearly plans for consistent growth.